The exhibit celebrates 200 years of Grimms Fairy Tales, with works inspired by childhood classics like Hansel and Gretel, Snow White and Sleeping Beauty.  Each illustrator has interpreted the much loved stories in their own way, with damsels in distress, majestic castles and noble steeds featuring strongly in typical fairytale fashion.

On display was a variety of illustration styles from bold monochrome block prints to whimsical watercolour representations and clever collage techniques. The perfect escape from the December chill, this exhibition had Cellardoor dreaming of a happy ever after.

Sadly the exhibition is now over, but find out more from the talented girls here
By Cheryl Maguire

December 12, 2012 by cellardoormagazine | 0 comment
angora knit, Bridget Jones, Christmas dinner, christmas jumper, December, Knitwear, printed jumper, reindeer, Skier, snowflake
Yes it’s only just turned December, but already there’s hype surrounding the festive season when Santa comes to town! Passing out on the sofa, a belly full of turkey and plonk, the eccentric Uncle declaring his love for Nigella Lawson’s stuffing, and the Grandparents merrier than ever after their annual port and sherry concoction…. seems like it only occurred yesterday. But the stores are decked out for the big day already, and here at Cellardoor we’re anxious to decide what to wear on this joyous day?
Now i know you’re thinking some elastic waist trousers and a maternity style top would do the trick nicely, after you’ve divulged enough festive food to sink a battle ship, but this year we’re embracing the craze that’s hit the high-street… Knit. We’re not saying we want you to resemble Bridget Jones in that fetching Reindeer christmas jumper, oh no…. we’re thinking sumptuous angora knits with a subtle hint of Christmas, teamed with a skinny jean and sizeable wedge shoe, possibly a bow in the hair for a delicate feminine touch. Magazines like to encourage you to dress in sparkles and glitz on the 25th, but we think there’s something oddly attractive about a good old-fashioned knit. So get on the hunt for yours! 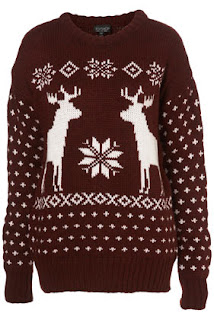